Gmail might be the de facto choice for personal email, but Outlook is still one of the top options for workplaces. Microsoft has been working on ways to drive mobile adoption higher, and today the company announced several new features intended to get more users trying Outlook on their phones.

The Cortana app may have been retired earlier this summer, but that doesn’t mean Microsoft is giving up on voice interactions. We saw the first inklings of Cortana’s arrival in Outlook late last year, and now the Outlook mobile app is set to gain a series of new voice commands for sending messages, scheduling events, and connecting with colleagues.

Outlook users on desktop and the web will be encouraged to “extend the Outlook experience” to their mobile devices by sending a text message to their phone with a link to the app. Once it’s downloaded, Microsoft is giving users the option to simply scan a QR code on the web to securely sign in on mobile. 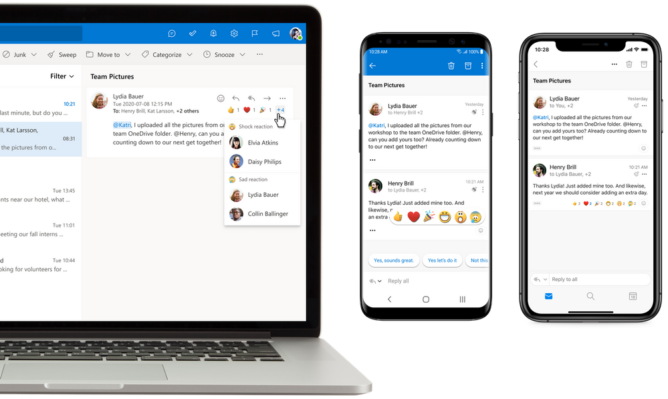 Quick reactions are coming to desktop and mobile.

Along with simplified sign-in, Outlook will be rolling out a number of new capabilities over the next few weeks. Suggested replies will offer helpful suggestions for scheduling meetings during available times based on Outlook’s calendar. Weather forecasts will be viewable in different calendar views to provide more information on how to prepare for the day, and emoji reactions will be coming early next year. As we reported last month, the Outlook app is also adding customizable actions to notifications.

Outlook is slowly becoming home to more and more  features. In February, it gained annotation abilities for photos and scanned documents. New additions are nice and all, but I can’t help but feel like Microsoft is trying to cram a lot of disparate functionality into a single app.