Google’s second try at wireless earbuds is going a lot better than its first attempt, but that doesn’t mean the Pixel Buds are perfect. Users have complained of issues like random disconnects and audio cutting out from the start. Google tried to address some of these bugs in last month’s feature drop, and now the company is rolling out a new firmware update that should fix a very specific kind of audio cutout.

According to a post in the Pixel Buds Community forum, version 552 is being pushed out to fix a problem that some Pixel Buds users experienced. On version 550, audio cutouts would occur every 110 seconds. If that seems oddly specific and super annoying, join the club. Google and a Bluetooth stack are a frightening combo. 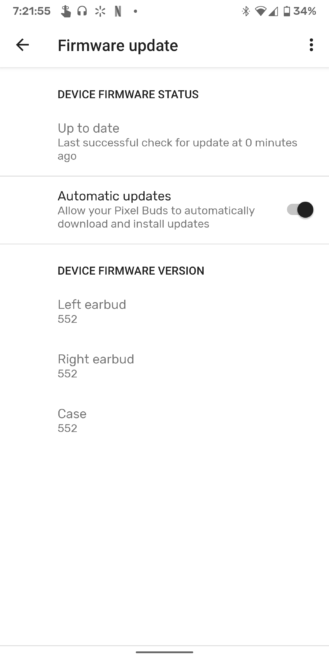 The new update brings both Pixel Buds and the charging case to version 552.

Luckily, the Pixel Buds team was able to identify the issue and find a quick fix thanks to user reports. Updating to version 552 should resolve this bug. Check to see if the firmware update is ready for you in the Pixel Buds app settings, then just connect the buds to your Android phone for a few minutes to let the update download and then place them in the charging case for it to install. If you don’t use the Pixel Buds with an Android device, Google recommends you contact customer support — I guess they can push it out manually.

It’s nice to see Google trying to fix issues like this quickly, but I’m still not convinced that all of the Pixel Buds’ issues can be solved with software updates. Google may have finally remembered where it stashed the colorful Pixel Buds units last month, but the earbuds are still hard to recommend when there are better options available for less money.