Pokémon Go might not be as popular as it once was, but there are still plenty of trainers out there catching ’em all. Now the game has announced tweaks that should help make the leveling up process more fun than ever, as well as allow for players to reach up to level 50 — although that won’t be easy to do.

Starting on November 30, players will earn more XP from doing things like catching and evolving Pokémon, hatching eggs, registering new Pokédex entries, and more. In certain cases, you’ll earn as much as double the XP as before, which should make it easier for newcomers to catch up to experienced trainers.

There are also new things for those high-level trainers. If you reach level 40 before the end of this year, you’ll earn the title of “Legacy 40 Trainer” and get exclusive in-game rewards like Timed Research that grants an exclusive Gyarados Hat avatar item and a special Legacy 40 medal. 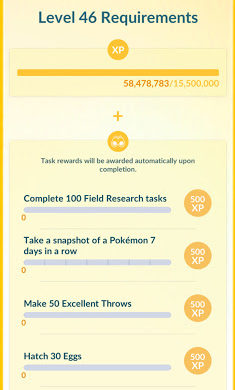 Here’s a look at what to expect when trying to level up past level 40.

For those already at level 40, you’ll soon be able to put that extra XP to good use. Sometime in the future, you’ll be able to work your way up to level 50 — although it will take some challenging tasks that require more than just XP. In addition, the team is working on updates regarding encountering and catching Pokémon, Adventure Sync, Buddy Adventure, Field Research, Gifts, and more. The new features for level 40 trainers will start rolling out for testing in Australia tomorrow, with the rest of the world to follow later on.