Microsoft’s new Chromium-based Edge has turned out to be a reliable alternative to Chrome — while similar to Google’s browser, it is less resource-intensive and even offers a few extras like Collections. However, one thing it lacks is the ability to sync tabs and history across devices — not anymore. Microsoft has started rolling that out to users in the UK.

This development comes shortly after the feature was being tested in the beta channel. The update now makes it possible to sync history and tabs across mutliple Edge clients on various platforms: Windows, macOS, Android, and iOS.

To check if you’ve received the feature or not, head over to Settings > Profiles > Sync and see if you’re able to check the History and Open Tabs option. If the feature isn’t available to you yet, the two options will still be visible but with a message saying, “Coming soon! We’ll turn it on as soon as it’s ready.” Alternatively, you can jump over to the Beta channel as the feature rollout has been completed for it, regardless of region. 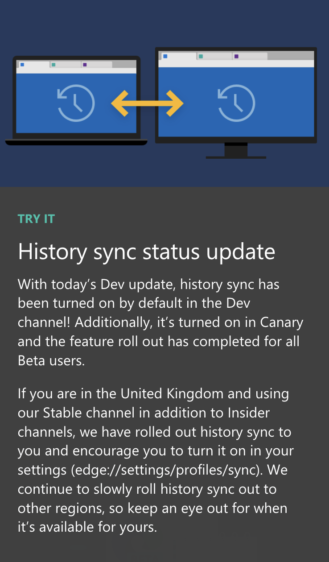 Once enabled, you’ll be able to pick up where you left off across all your devices, and you won’t have to scramble to a particular phone or computer to find that website you visited on it.

If you’re not in the UK yet, keep an eye out for the feature. According to Microsoft, it will hit other regions too soon.